One of the biggest challenges for policy-makers when developing public health guidance is to create and foster a positive environment that allows numerous players from multiple levels to play a role in the interpretation and application of evidence. 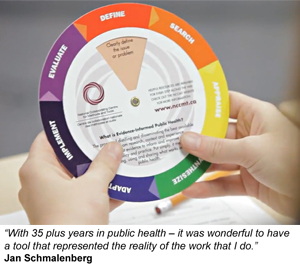 According to Jan, it was reassuring to find a tool that contained the important aspects of best practice which allowed me integrate the expertise I had developed during my many years in the field.

When Jan shared the tool with Cheryl Cusack and Michelle Johnson -- core members of the Public Health standards working group -- they, too, quickly recognized the value of the tool. It would support the team of professionals they would be working with to share and value their own expertise and knowledge of their communities as they moved this important work forward.

The tool was not only used as a foundation to lay out the process to develop the standards it was also used to develop and facilitate workshops. The tool gave the team confidence in a process to develop Manitoba best practices. Using the model as a guide, the team planned and carried out workshops for the Standards Advisory Committee, Inter-Regional Public Health Managers, and Public Health Nurse Champions to integrate their knowledge and expertise into the development of the Provincial Public Health Nurses Standards. The workshops were planned, using the model as a framework and participants were asked to critique evidence, and to consider and integrate their knowledge and expertise in order to guide public health nursing practice. 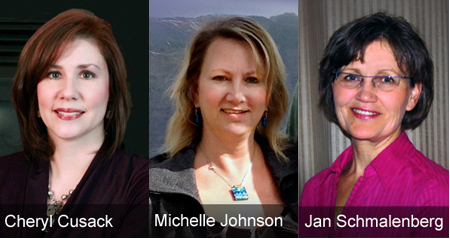 When reflecting on this process, Michelle and Cheryl both stress the importance of developing standards that are evidence-informed. Michelle observes that evidence is important, however complex, but literature is not the only factor. The published results of one research study are not a guarantee that a program or practice will be relevant or applicable in the local context. As they developed the guidelines, the team found the resources from NCCMT extremely helpful in understanding and developing a systematic way to apply the evidence while also considering important practice expertise and local and political contextual factors that would provide focus at the local level.

Looking back on her experience, Michelle also observed that there is so much to consider as we develop guidelines and standards. We seek practice-based evidence, but it is not always well-defined nor from a Canadian focus. It can be challenging to identify which pieces of evidence are most relevant to the work we are doing and we also need to be cognizant of the political, historical and resource implications. The NCCMT's approach and tools allow us to bring many factors into view.

Manitoba's prenatal, postpartum and early child health standards are still under development and are currently being reviewed across the province. Team members found the resources from the NCCMT were integral in supporting a diverse group of public health professionals from government, the community and the academic sector to come together and work as a team.

Are you looking for support in the development of evidence-informed decision making in public health standards, policies and guidelines?

Claire Betker appreciates how important context is as we move deeper into the front line of public health practice.  She also understands that the process of developing effective evidence-informed public policy does not happen overnight. 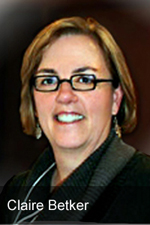 In 2011, as senior Knowledge Translation specialist with the National Collaborating Centre for Determinants of Health, Claire was instrumental in bringing together a variety of public health practitioners including inspectors, nurses, physicians, dietitians and other members of the health care community in Manitoba to discuss evidence-informed decision making and share the work of the NCCMT.  Following that workshop, an ongoing journal group continued to meet.

Claire's work to promote evidence-informed practice helped build an important foundation for the development of solid provincial standards for prenatal and early child health in Manitoba.

Claire believes that using the NCCMT's tools results in a win-win for policy-makers and public health practitioners.  She feels that the NCCMT tools offer an adaptable and yet powerful means to integrate a variety of perspectives that increase synergies and ultimately gain support for new policies at all levels.